A Cake for Jim Broadbent 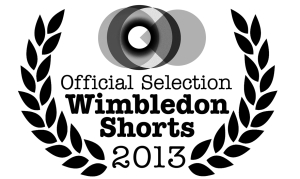 Chantelle Dupont, a young French woman, sends Jim Broadbent a cake to thank him for the entertainment he has provided her and his fans over the years. But when the reply comes it is not from him, it is from his wife; Jim is away making a film, but his wife enjoyed the cake and to say thank you she has made Chantelle a cake in return. Chantelle, delighted by the gift and excited by the new flavours it contains, immediately responds by making more cakes herself. She is thrown into a passionate and obsessive journey taking to her to the unchartered heights of culinary exploration – but can her new friendship survive Jim Broadbent’s return home?

In 2004 I spent a week in a cottage in Dorset rehearsing for an improvised Edinburgh show. It was an intensely creative environment and when we weren’t doing spontaneity exercises or improvising narratives we often found ourselves making masks out of newspaper or drawing pictures a line at a time each, or on one occasion playing a game which as I recall mostly consisted of drawing on each others’ faces with burnt cork. One member of the group had brought with him a typewriter and when in need of more solitary activity people would sit and type out letters to famous people.

There was a letter to Brian Blessed typed on the back of an envelope, a letter to David Jason asking when he was shooting his next episode of Inspector Morse and a letter to Derek Jacobi saying we would like to make him a cake. One of the group – the one who had instigated the burnt cork game, in fact – felt we ought to keep Jacobi’s letter in a cake tin for 24 hours so that it would have a ‘comforting cakey smell’.

The nice thing about the letters was that, although the content might have suggested they were the work of dangerous lunatics, the fact that they were bashed out on a good old-fashioned typewriter (onto occasionally eccentric media with cakey smells) gave them a much sweeter nature. One could happily imagine Derek Jacobi getting a whiff of his letter and feeling comforted, even though we felt he was unlikely to take up the offer of an actual cake.

I can’t remember if we ever posted the letters.

Several years passed. During that time I actually met Derek Jacobi, though sadly I didn’t have the foresight to bring him a cake.

In 2011, as the summer was drawing to a close, one of my semi-regular film nights got rather out of hand and instead of sitting down with some friends in the evening to watch a film I found myself getting up in the morning with some friends who wanted to make a film.

One of them had spent the previous day making cakes in preparation. I don’t know why she considered this a priority, but it provided the inspiration for the script that I duly knocked out, and I’m sure that the letters of that week in Dorset were at the back of my mind as I started to develop the story of a fan making a cake for their hero.

Not an obsessive fan with stalkerish tendencies – there are plenty of films about those already. There’s no reason why a cake made for a famous personality shouldn’t be entirely innocent. No reason either why a relationship shouldn’t develop out of it, with all the dramatic possibilities that suggested.

Without a typewriter we needed other ways of showing the non-threatening nature of the cake. One of the friends present was about to embark on a degree in linguistics and this suggested the happy solution – what could be less threatening, or more delightfully bonkers, than said cake coming all the way from France?

We did all of the filming except for the credits on that day, getting through a number of cakes in the process (the preparatory day of baking proved entirely necessary after all). The rest of it took quite a lot longer; in finding a look and a sound to match the eccentric Frenchness of the film we went to early Truffaut for inspiration, which meant some substantial post-production and a lot of foleying. It was also clear that music needed to both drive the narrative and cement the style – editing took long enough to finish that by the time I had a rough cut I had a very clear idea of the music I wanted, so I spent several obsessive weeks writing and recording it myself. After all that work it was a little heart wrenching to have to degrade the sound to match the picture.

Why Jim Broadbent? Perhaps I felt I’d already missed my chance with Derek Jacobi. Also, Jim Broadbent had been on the radio to promote his latest film a few weeks before we filmed and clearly came across as the kind of person deserving of a comforting cakey delivery. Given his international success in recent years, it’s easy to imagine that his fan base will have spread to the remotest parts of France and the sweetest, loneliest cake enthusiasts. Apart from anything else, I have a low-budget feature in pre-pre-pre-production and there’s a small part in it which I’d really like Jim Broadbent to play – if anything’s more likely to entice him to play a role than making him a cake, surely it’s a film about someone making him a cake?